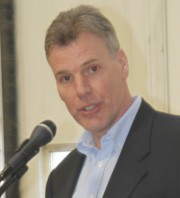 2013 – 2014; Oliver Wyman, Dubai, UAE (Consultancy; 20 fte, privately owned)
Consultant. Assisted with the planning and execution for a pump and valve manufacturing plant in Saudi Arabia. Proposed a product range and made a marketing plan.

2009 – 2012; CGS, Saudi Arabia (Manufacturing and contracting; 1000 fte, privately owned)
CEO / General manager of Cold stores Group of Saudi Arabia, a group with branches in Jeddah, Dammam, Bahrain and Kuwait, HQ based in Riyadh. The Group has 3 lines of business: Refrigeration contracting, Transport cooling and Special Projects. Responsible for the branch in Riyadh and later for the Group: consolidated US $100m, 850 heads and the production facilities.
Have successfully turned around the Riyadh branch: growth 2010 intake and sales >> 40%, Operating Income > 200% Implemented a Group structure. P & L responsibility for the Group. Have implemented a S&OP process. Implemented lean manufacturing throughout a $25m plant.

2006 – 2009; Flowserve EMEA, Essen, Germany (Manufacturer of Oil & Gas equipment; 15.000 fte, public)
Sales Director / General Manager EMA division of American Concern, based in Germany, with sales and service companies all over the EMA region: 25 legal entities. Responsible for the End User sales (Euro 179 million, 550 people) and responsible for EMEA P&L.
Have successfully reorganized the Sales and Service organization in the UK in 2006: from a zero earnings to a highly profitable company; revenues grew in 1 year with 17% earnings increased to Euro 2.6 million (16% net.)
Were heavily involved in training and coaching programs to upgrade Sales engineers and sales performance. Have planned and executed an acquisition in the UK of a service company. Have successfully brought the French country organization to a break-even point in 2007, after losses in 2006 amounting to Euro 0.5 million. Planned and executed a new company set up in Norway, Finland and Sweden, Dubai and Egypt. Managed multiple regional production sites (Tarragona, Essen, Manchester) for precision parts. Did ne a greenbelt project to improve cycle time and on time delivery from 60% to >> 95%, while reducing lead times by 50%. Responsible for the EMEA Performance based Life Cycle contracts (54) with Shell, Exxon, Sasol and others.

2005 – 2006; ZAPP b.v. Netherlands (Manufacturer and supplier to the TV industry; 150 fte privately owned)
Managing Director (interim basis) of a Holding with 4 companies in the Netherlands and abroad (Turkey). The company is active in the worldwide market for consumer electronics (television and audio).
P&L responsibility, 100 to 130 employees. Special attention had the areas of: Improving the financial position of the holding.
Cost savings on production and overheads; and outsourcing of production.
Sales and sales management. Moved the production from The Netherlands to Turkey, saving with this Euro 10,- /head/hour of a production force of over 100 heads. Divested two loss making companies of the group and established a Chinese legal entity with the purpose of saving on resources and material components.

1997 – 2004; GEA, Shanghai (Life Science technology; 15.000 fte, public)
Managing Director of Shanghai branch and member of the board of directors of Grasso’s Chinese joint venture that manufactures and assembles capital goods in Shanghai. Report directly to the board of directors in the Netherlands. Responsible for profit, loss, and management for all departments responsible for complete fulfillment of customer orders, including: Production, Engineering, Quality, Planning and Scheduling, Purchasing, Machine Shop, Warehousing, and Customer Service.
Started from scratch in 1997 and developed the company into a profitable business with a turnover of Euro 15 million and about 100 people.
Have successfully merged two companies: a Wholly Foreign Owned Company merged with a Joint Venture, which resulted in a remarkable cost reduction (up to 25 %) and a joint and strengthen sales force.
Build up the sales organization in two years of about 12 sales managers and a flexible network of agents and distributors in all economic strategic areas of China.
Have set up a CIP system to improve manufacturing and cycle time.

BUSINESS EXPERIENCE
• A seasoned executive from an international sales background with vision and ability to execute. Managed teams and people 100 - 3000 fte and revenues ranging from € 15- 190 million. Currently involved a divestment of a company in Saudi Arabia.
• Successfully led the restructuring of a 150 fte production company. Increasing workforce with 30% within 3 months and achieving positive EBITDA within 12 months

• Rebuilt a sales organization including personnel hiring for a staffing organization. Managed sales growth of 75% and improved profit margin 80% through sales discipline and KPI performance management.
• Planned and led a turn-around of a Sales and Service organization in the UK: from a zero earnings to a highly profitable company; revenues grew in 1 year with 17% earnings increased to Euro 2.6 million (16% net.).
• Have planned and executed an acquisition in the UK; an oil & gas equipment service company.